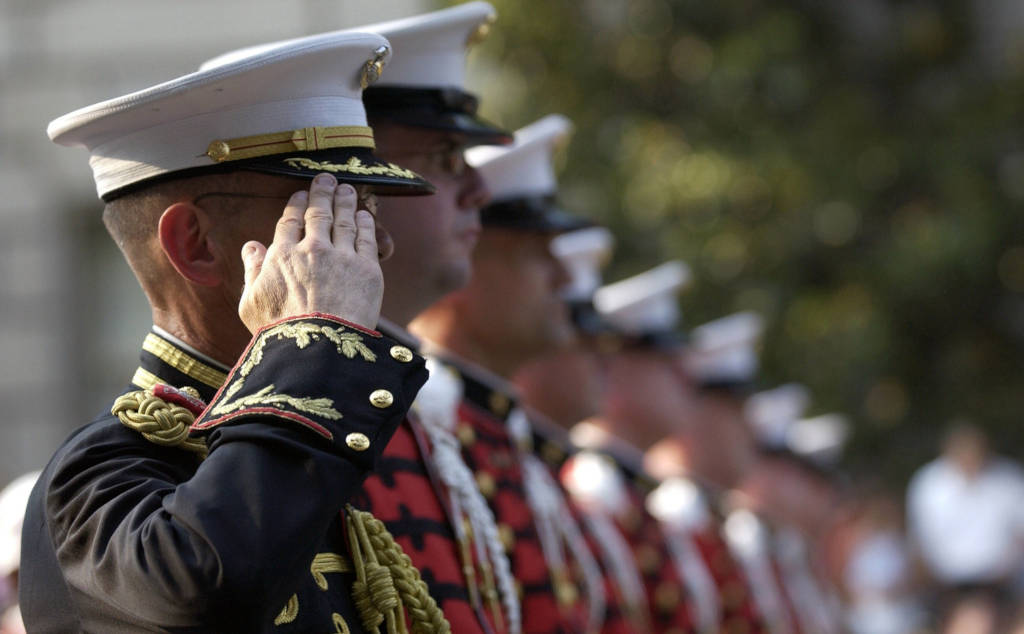 The National Anthem is a patriotic song and a rousing statement symbolizing the country’s freedom, glory, and beauty. There are established rules of conduct and proper decorum to be observed by citizens and visiting guests when the national anthem is played. Everyone needs to understand these established rules as a show of respect each time the national anthem is singing.

The national anthem code of etiquette dictates that all civilians present should stand upright in the direction of the flag (if there’s a flag) while holding their right hands across the chest. Armed service members in uniform and anyone from the military, even if not in uniform, should salute in the military way when the song begins and maintain the same position until the last note. Veterans should also ensure that their hats are taken off and held over the left shoulder.

Below, we are going to dig deeper into everything there is to know when it comes to national anthem etiquette to avoid a breach of conduct with regards to the law. Although there is no punishment enforced for breaching the flag or the national anthem code, it is imperative to respect the brave men and women who fought for the country and to honor the symbols of a nation.

The following are ways of showing respect and honor when the national anthem is played.

It is not mandatory to get on your feet when the national anthem is played, but it is really important to adhere to proper etiquette and stand for the anthem. After all, the entire song lasts only for a couple of minutes, so it is highly unlikely to get you fatigued.

Athletes and participants in an event are advised to follow procedures to get on their feet and show respect every time the anthem is played. In May 2018, the NFL issued an official statement addressing all league and team personnel to stand and respect the flag and the anthem.

Face the Flag or Music

A lot of people tend to face the person who is performing the national anthem instead of facing the flag itself. It is necessary to face the flag being displayed – if there is one on display.

In the event, there is no flag on display and the music is pre-recorded, you should face the direction of the music. If you can see the person who is singing the national anthem, make sure to face the person, and give them your full attention throughout the song.

It is important to stand and face the flag to honor those who died in a war to secure the freedom of the nation. A flag is a symbol that unites the country, so facing it while the national anthem is being performed shows the ultimate salute to the principle of justice.

As soon as it is announced that the national anthem is about to be sung, get on your feet in anticipation and place your hand across your chest. This etiquette applies to everyone including children and elderly who cannot stand on their own.

If you are walking to your seat when the anthem starts to play, make sure to stop walking immediately. Stand at attention and place your right hand over your heart until the anthem is done.

Putting your right hand over your heart makes you appear and look more honest. It is a seemingly simple-yet-effective gesture that plays a critical role in symbolizing dignity and honor to the nation.

If you are wearing a hat, make sure to take it off with your right hand and place it over your left shoulder or heart. Wearing a hat while the national anthem is being sung is considered rude.

It is equally necessary to remove your eyeglasses when the national anthem is played. You might feel a little uncomfortable in the bright sun, but just hold on for a few seconds until the anthem is concluded.

The headdress protocol applies to men, women, and children in attendance during the national anthem. This etiquette excludes any religious headwear such as a yarmulke, as well as any other headwear worn for religious purposes.

This national anthem etiquette also exempts ladies-only decorative hats such as those worn at the Kentucky Derby. Of course, the uniform hats of flag-bearers or performers can as well remain in place.

The national anthem etiquette requires the military servicemen and women to perform a military salute at the start of the national anthem. These include veterans and current military members, who have to render and hold this posture until the anthem ends.

Initially, the former members of the military were only required to hold their hands over their hearts as would civilians. However, the national anthem protocol was amended in 2008 allowing the veterans to render the military salute during the anthem.

Both current and former military personnel must also face the flag and perform the military salute upon the first note of the national anthem. They are to maintain this position throughout the entire anthem.

The national anthem etiquette states that everyone must give full attention to the song and stay calm throughout the performance. You might want to sing along with gusto if you wish. Otherwise, you must keep your mouth zipped and refrain from talking on your cell phone.

If you talk during the anthem, it shows you are not paying attention to the song, which could mean you have no respect for its meaning. And you could also disturb those close to you who wish to show their respect to the national anthem.

Be respectful while the anthem is playing by putting your cell phone away and keeping silence. Be calm and avoid eating, drinking, smoking or chewing during the song. Have nothing in your hands – of course except a hat if you have one – until the anthem has ended.

Apparently, this sounds odd because people usually clap during the Super Bowl and related sporting events. Everyone claps and applauds at a ball game and then the players emerge, but that goes against the national anthem code of conduct.

Performers do not lead the audience in playing the national anthem for their gratitude or applause. Rather, the song is played in honor of the country’s number one core value: freedom.

Anthems of Other Countries

During sporting events like the Olympics when participants come from different countries, the anthem of another nation will be played in the host country. The etiquette requires everyone to stand up, take their hat off, and stay quiet in respect for the anthem.

It is imperative to remain upstanding and exercise absolute politeness when another country’s national anthem is played during sporting events or diplomatic events. Being respectful and having a little courtesy can go a long way.

Civilian males are obliged to take off their hats. Nevertheless, you are not required to put your hand over your heart or render a salute to a foreign anthem, flag, or allegiance.

The U.S Constitution bears the First Amendment that safeguards the rights of citizens and non-citizens who do not adhere to this protocol for personal reasons. A good case in point is the Jehovah’s Witness, whose religious practice goes against the rule of standing when any country’s national anthem is being performed.

The national anthem is a symbol of pride and shared history for the valiant men and women who made enduring sacrifices to bring forth the country’s freedom. It is the symbol of a people’s willingness to stand side-by-side with unspoken promises that the future will be better than today. Honoring the national anthem etiquette is akin to showing tribute to the men and women who fought for the country and made the land free.